Okay so last night, the popular Star Wars Channel: Star Wars Theory uploaded an emotional 3 minute and a half video with the title of “Disney Files CLAIM on Vader fan film and is making money from it now“. At the time of writing his video has almost reached half a million views. With the well made Fan Film well over 6 Million views.

In the video, Star Wars Theory states while it wasn’t LucasFilm that did the claim but that is was Disney. Now as explained in the video he states that their were rules LucasFilm had given him to follow. These being:

Understandable, it is someone else’s intellectual property. You don’t own it, so you aren’t allowed to make money from it. But Star Wars Theory followed these rules, got his passion project made. Which, you’ve got to say well done. It is a very well made Fan Film. Some great props, costumes, effects and some neat shots for a Fan Film. It is estimated the video it’s self could have earned him over $80,000 with min the past two weeks.

But earlier yesterday, Star Wars Theory had got a message, a claim on his video:

Now looking through the comments, it’s ugly. A lot of “Fuck Disney”, “Boycott Disney”, “Boycott Episode IX”. To those people, relax. Be reasonable and rational. Take a step back, breathe and just take a moment to think: Why?

It’s not a conspiracy, or fiendish plot or Disney saying they don’t care about Fans. Do you really think Bob Iger or Kathleen Kennedy or Mickey Mouse are sitting behind a computer seeing this Fan Film and claimed it themselves or gave the “order” too? To think that, it’s delusional and childish. I’ve seen comments even going as far (believe it or not) saying it’s Disney trying to get it’s “Money Back” from Solo: A Star Wars Story’s Box Office. It’s amazing how stupid some people can be really.

I’m going to break off for a moment, just to elaborate on what I’m thinking right now, between this paragraph and the next. I’ll be honest, I was in debate on whether or not to even write about this. Because I’m going to explain about Warner Chappell, what they do, what they’ve done to other YouTubers, with very similar claims to that of Star Wars Theory. But sometimes I think, what’s the fucking point. The pot is already stirred. And it’ll continue to get stirred by the shit stirring YouTube Channels that have cropped up in the past year. That only care about stirring the pot, because it creates drama and controversy. You have Channels now that make money on shit stirring, they get off on it. Exaggerate it, spread it. From Solo’s Brazilian Posters without the Guns, to Kathleen Kennedy’s firing to Star Wars is dead. But when something is rational, takes it’s time to explain: Why? Sometimes it’s can feel like a drop in the ocean. But if I can inform someone, even one person by doing research, I’d done my job.

I could shit stir this if I wanted too. Gain a lot of attention, negativity always seems to trump anything positive these days. But I’m not like that. As Yoda would put it, it’s the quick and easy way, and when you go down that path it consumes you. It’s just hate and anger, for days, weeks, months and by the looks of things years. Remember the Twits? The Roald Dahl book, there’s a quote within it that’s quite interesting and relevant. And all you have to do is change ugly to angry:

Usually if I don’t like something, I move on. But I do want to get the facts out. To inform you of something the shit stirrers are not doing. Looking into it. So what happened?

Star Wars Theory isn’t the first (and won’t be the last) to be hit with a claim like this. But lets look into the claim. Because since this claim, other Star Wars YouTube Channels such as Battlefront Updates, Eckhart’s Ladder and Steele Wars have address it as a Warner Chappell issue. Due to previous experience with claims. Many of Battlefront Updates’ videos have been hit with claims from Warner Chappell.

Just to remind you what happened to me previously – they went through my videos (sorted by most views of course, because you know, more money for them) and claimed ALL of them containing any fan-made music that resembles Star Wars music at all (back in 16/17)

Now Warner/Chappell Music, Inc., is an American music publishing company and a division of the Warner Music Group, they are not part of the Walt Disney Corporation. But while Disney owns the “song” the Imperial March, it’s Warner Chappell that owns the licensing rights. Now Theory’s video, while it does not contain the actual Imperial March, it does have a score that sounds similar to it. In fact a similar score that appears three times during the Fan Film.

Warner/Chappell own the rights and royalties to the music given they took 20th Century Fox’s catalogue in the 80s (including Star Wars). Disney is only mentioned in the YouTube claim because they have a deal with EMI to use the music, and EMI regularly pay royalities to Warner/Chappell to use that music. It’s Disney’s exclusive usage, but Warner Chappell’s right and only their ability to make the claim. 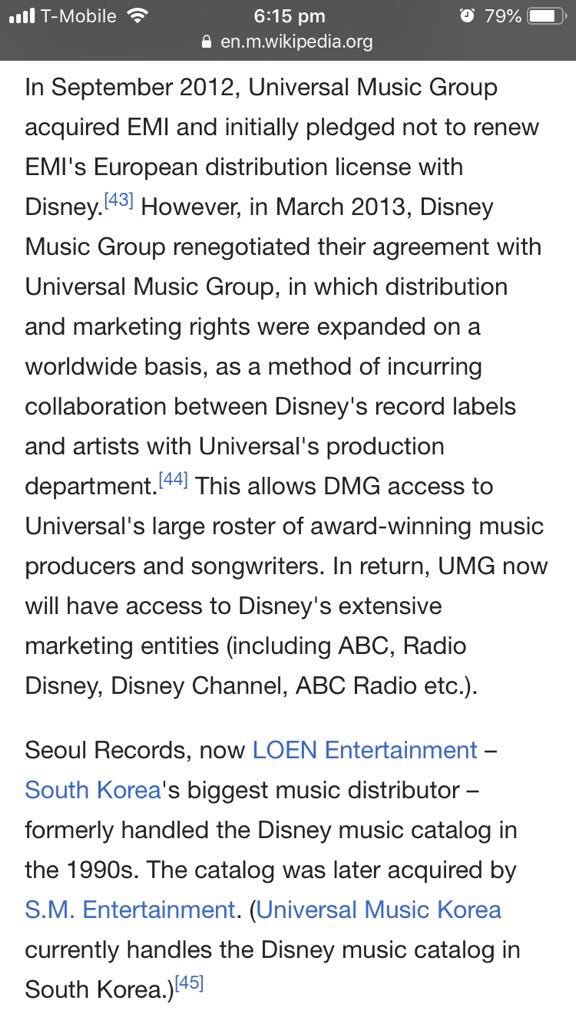 And this isn’t the first time Warner Chappell has claimed a video for the use of a similar sounding score. Or even no score. Yes, you read that correctly, no score. About a year and a half ago Warner Chappell claimed the Auralnauts video “Star Wars Minus John Williams -Throne Room” containing as little as 0% of its IP with Warner/Chappell, the owner of the rights to John Williams’ Star Wars compositions.

To quote the artile by Techdirt:

Although Warner engaging in kneejerk copyright claims with zero pre-claim vetting doesn’t appear to be the frontrunner. First, a clip of music sounding a lot like a John Williams piece opens the video. But the piece is written and composed by Gustav Holt — and is “copyright-free” according to Wired. The studio behind Star Wars had no objection to the clip, so it’s not related to the visual content. That leaves Warner, possibly motivated by a faulty trigger in its Content ID auto-scanning. There’s also a four-second loop of Williams’ score appended to the end of the video, which may have pulled the Content ID trigger as well. But even if so, there are still problems with Warner and YouTube’s Content ID system because the wrong piece of music was named in Warner’s copyright claim.

[T]he Warner/Chappell claim incorrectly identified the “Star Wars Main Title” track as being present in the Auralnauts video. The single brief Williams excerpt used by the Auralnauts actually comes from a track titled “The Throne Room and End Title.”

Whatever the case is, the claim was obviously bogus. But it shows how fragile an ecosystem YouTube can be for those using it as a revenue stream. Even when wrong about pretty much everything, Warner was still able to siphon this video’s profits from the Auralnauts. The Auralnauts challenged Warner — which the article points out is something that happens in less than 1% of content claims — but it didn’t matter. In fact, it’s unlikely anyone at Warner even bothered to read the challenge before issuing a rejection.

That leaves the Auralnauts in the difficult position of risking their entire channel to continue disputing Warner’s obviously erroneous copyright claim.

[I]f a copyright claimant such as Warner/Chappell does not back down from its claim, the video is likely to get taken down from YouTube entirely—and in that event, the Auralnauts would also be penalized by the platform as a copyright scofflaw and barred from some privileges, such as linking to their own store. Three such takedowns and YouTube will delete your channel.

You can read all this over on Techdirt along with the articles from WIRED and Splashdot.

But I did some digging, because this claim is a manual one, so that means someone personally made this claim. An employee who sits behind a desk, at his computer and does this as a job. And that job is called a “Digital Rights Administrator”. Now I’ll be using (for this part of the article) information from Universal’s Music Group Careers. So as you can see from the link provided, this is from their site:

UMG’s Digital Rights Administration team is dedicated to monitoring and monetizing content on digital platforms.  We are currently seeking eager and exceptional new hires to focus exclusively on managing UMG assets on YouTube. The team’s goal is to maximize value from the rights of UMG’s recording artists in the digital space through content claiming.

Now while I couldn’t find a similar job description over at Warner/Chappell Music, I was able to find some information from LinkedIn. Now this is some’s account, so I am not going to name them, or link them. Because I know how some people are. And I don’t want someone, who is just doing their job, getting abuse from angry fans.

But as you can see, there is a job where someone will be going through YouTube on behalf of these companies.

As as you can also see, third from the bottom, “to run the company’s YouTube licensing system, CMS, to monetize and collect advertisement revenues on unlicensed videos. That is exactly what has happened to Star Wars Theory’s Vader Fan Film.

It’s not Disney being evil, or Bob Iger being jealous. Just someone in an office at Warner Cheppell doing a job. Is that person in the wrong? Yeah, it’s not the official score, but similar to Auralnauts, there not much that can be done. Though voicing it at the right company would be a start.

So it would seem that it was indeed Warner Chappell that did put in the Claim and not Disney. It would appear that Star Wars Theory tried to appear the claim, and lost.

You can put your torches and pitchforks down for now.