Life is scary enough as it is, but now imagine a vast galaxy filled with terrifying people and creatures hell bent on killing you: giant bloodthirsty monsters, mysterious beings, and individuals powerful in the Force! Let’s dive head-first (albeit reluctantly) into the darker side of the franchise!

Let’s kick things off with a classic! As if being thrown down a trap door and landing in a dungeon isn’t bad enough, you now have to stand in the presence of this beast. The Rancor appeared on our screens in 1983, as the terrifying pet of Jabba the Hutt. An average Rancor stood at about 16 feet tall and weighed almost 2 tons. This is all made worse when you learn that they are classified as semi-sentient beings and are able to pass down stories and hold traditions.  If we happen to run into one of these things in our lifetime, let’s all just hope they’re standing under some type of heavy gate. 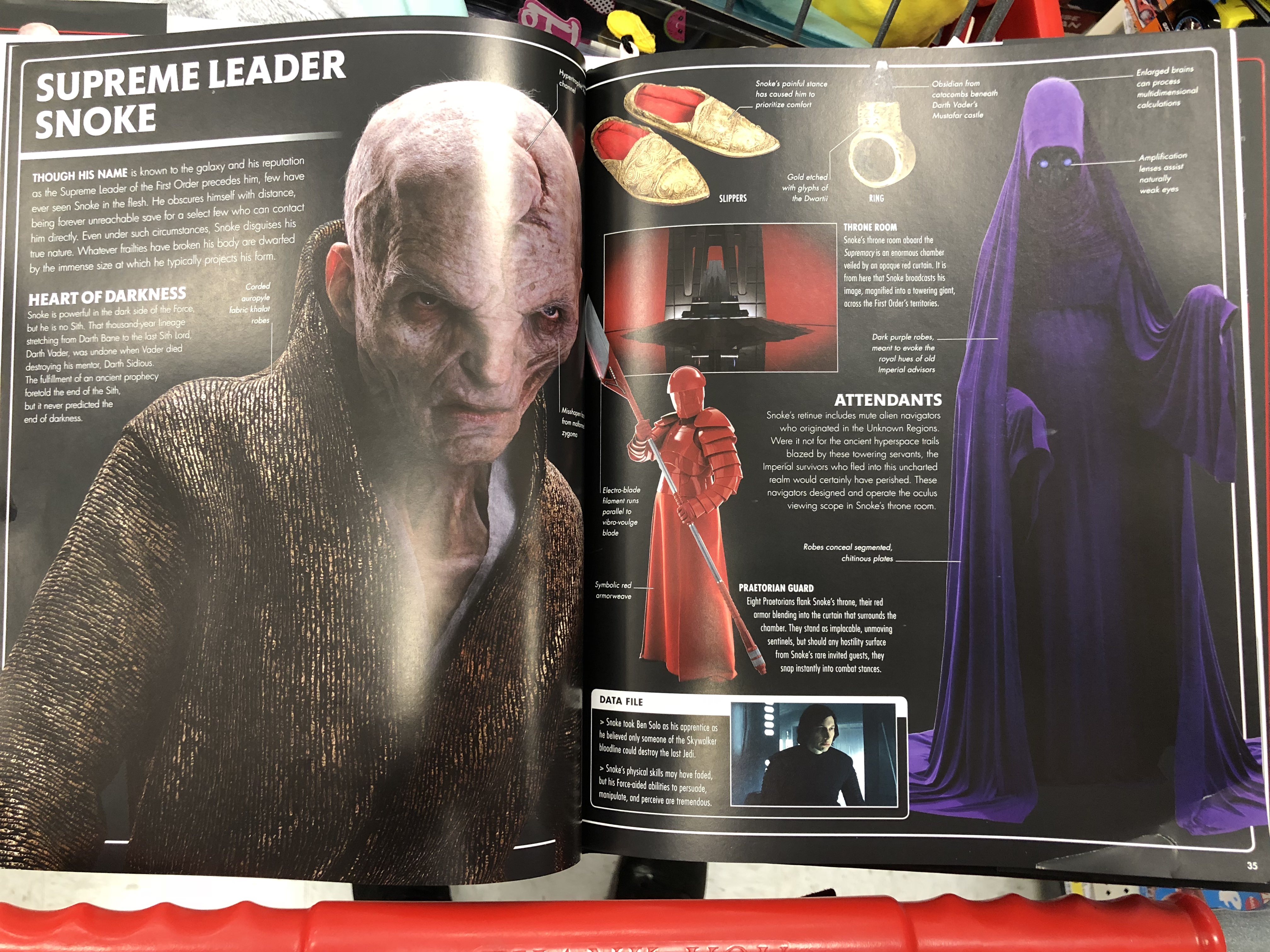 Most eagle-eyed fans noticed these tall dark figures in Snoke’s throne room while watching The Last Jedi. The Attendants give me a very “Spirit of Christmas Future” vibe: ominous beings, standing quietly, gazing into your soul. Their very existence is still a mystery to us all but something tells me that we will soon be learning much more about their place of origin, the Unknown Regions. What were they doing in the presence of Snoke? Only time will tell. 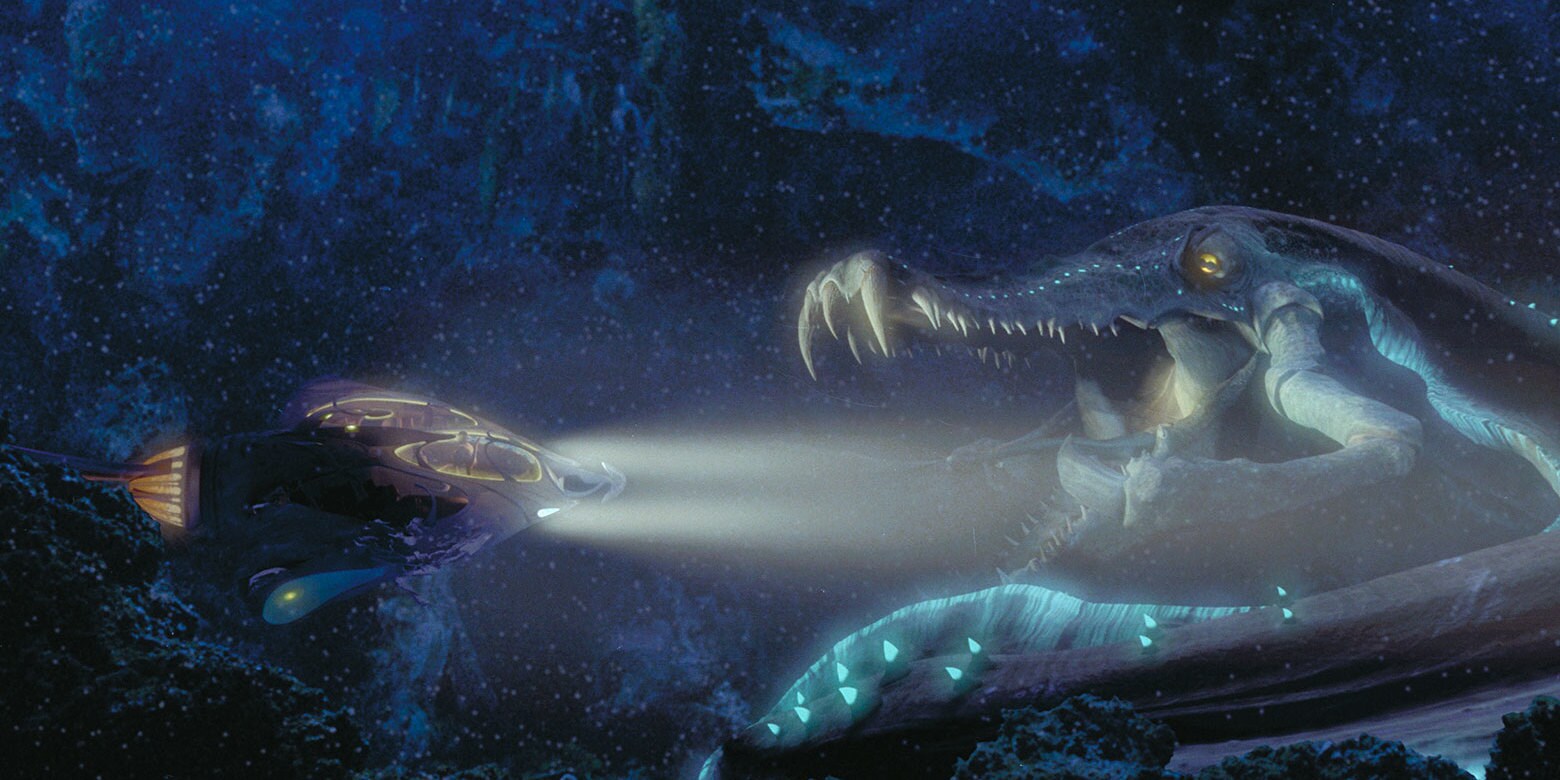 I can’t be the only one who was terrified as a child when this beast appeared on the screen in The Phantom Menace. My fear of the sea knows no bounds and I fully believe something like the Colo Claw Fish is hiding somewhere in the waters of Earth’s oceans. Measuring more than 40 meters long and with teeth the size of a human, this creature ensures that I will be staying off the beach for quite some time… you know… just in case they made it to Earth!

Luckily Bor Gullets weren’t sentient or there would be no telling how powerful they could become. These creatures were large and almost slug-like monsters. They possessed the ability to erase memory and read minds, which often led to them being used for torture. Most notability, Saw Gerrera used his Bor Gullet to torment the mind of a runaway Imperial pilot in Rogue One. I forget things often enough as it is, but I guess I should feel lucky that it isn’t because of an intergalactic mind wiper. The resident vampire of the Star Wars universe, Anzati didn’t drain your life with a bite… no, they did something much worse. The species hailed from the planet Anzat and were Force sensitive near-Humans, but with one big difference. They had two tentacle-like proboscises that extended from their cheeks which they used to feed on their victims’ brains. How did they get to the brain you might be asking? Oh, just by inserting the tentacles in through the nostrils… Yikes.

What an odd name for something this horrifying! Starweirds were creatures that only existed in the vacuum of space. Appearing mostly to spacers and sometimes Jedi, they would emit a telepathic scream to their victims. Appearing to possess a strong hate for Force-users, many believed that they were created by the Dark Side itself. While they don’t appear in the universe often, their toothy mouth, glowing eyes, and tattered skin will surely be appearing in your nightmares.

First arriving on our screens in Episode VII, Rathtars immediately made a lasting impression on me. Many people regarded them as the most dangerous beasts in the galaxy, and with countless tentacles, blaster resistant bodies, and tooth-lined, funnel-like mouths, who could argue? I think Darth Maul put it best when he said, “Rathtars are among the most dangerous creatures in the galaxy. Hungry. Vicious. Relentless.”

Mother Talzin – and her horde of Force sensitive assassins – feels like something out of a fairytale. Talzin’s power in Dark Magic seem to have almost no bounds. From creating Force monsters, raising the dead, putting people to sleep with a touch, and torturing by way of voodoo doll, this is one tough mother (I had to do it). Her deeds during the Clone Wars sent shock waves throughout the galaxy and who knows what her limit could have been if she was closer to one Emperor Palpatine.

It’s hard to talk about “Most Frightening” without mentioning Lord Vader himself. Darth Vader was born from the ashes of Anakin Skywalker, after betraying his friends and loved ones in search of power. Once inside his suit, the former Jedi would lead countless missions of murder, hunting Jedi, Rebels, and anyone he pleased. He became an immovable object in Lightsaber combat, Force ability, and of course stubbornness (at least that survived the fires of Mustafar). While I could go on and on about the awful things Vader has done, I’m sure just his image alone is enough to strike fear in any fan of the franchise.

For those of you who don’t know who Abeloth is, I apologize for introducing her to you. “The Mother” was a mortal woman who served The Ones (The Father, Brother, and Sister, who were the embodiment of the Force) keeping peace between the waring family. In her old age, she attempted to become immortal by drinking from the Fount of Power and bathing in the Pool of Knowledge. While her plan was a success, the Force took over her vessel, twisting her into a Force Horror. She would then reappear in the galaxy, posing a massive threat to all life in the systems. Through the Force, she was able to make people go insane from lightyears away, drain life energy, release torrents of Force lightning, create waves of Force energy to cause explosions, and so much more. She was described as “a living Force volcano” and was cited as being twelve times more powerful in the Force than Luke Skywalker. While truly frightening, I believe Abeloth deserves a spot on the silver screen some time soon.

Well, that’s my list! Hopefully you are having a great Halloween! Just remember, as you’re lying in bed tonight, starting to slip off to sleep, be wary of the creaking of your floors, the taps against the windows, and the shadows in your room… You never know what in the galaxy may pay you a visit on this All Hallow’s Eve…

For a deeper dive into this list, give my podcast Chatter Squadron a listen! We just released a special Halloween episode that may keep you company tonight as you try to drift off to sleep! –